Image tutorial on how BOM creation in Microsoft Dynamics 365 works

Let’s start with AX 2012 and make sure we completely understand how it worked there. Normally we create BOMs from the Released Product.  I am on a released product and after clicking “lines” in the Engineering section of the action bar in the top, we get this screen, the very familiar BOM-screen.

We could always choose between “New” and “Create BOM”.  Remember how you clicked “New” and regretted it?

If you are like me, you by far preferred “Create BOM” because it creates a BOM version in the background (when you have the number sequence set up to generate numbers automatically) and you only have to enter BOM version description and indicate a site. This is much quicker than the “New” choice. But let’s take a minute to fully understand how that “New” works.

What happened when you click “New”? You saw this screen.

The system is obviously waiting for a BOM-id. Many of us typed in some BOM-id. But that never worked. You can’t type it in. You have to do ‘Right click – View details” to go to the table where you create a new BOM-id. You would end up with the following:

This two pane screen has a list of all BOM-version id’s in the top half, and the bottom shows the BOM-lines for each version.

In AX 2012 this screen could be directly accessed in the Inventory Management module. This screen was not popular. Why not?

Now let’s go to AX7, a.k. Dynamics 365 for Operations. In reality, nothing has changed in the navigation but the menu names to access the screens have changed. The screens also look quite different and we may have a hard time recognizing where we are. Let’s start.

I start on a Released Product. While in the Engineering area of the action bar, there is no more “Lines” menu choice, but we now have two choices instead. If I only want to look at the Active BOMs, I would choose “Active BOM versions”. If I want to create a BOM, I click ‘BOM versions’. Then I get the screen below.

Under “New’, I have two choices.  The ‘BOM version’ is exactly what the “New” in 2012 was. (the white sheet icon). It is still just as unattractive to create a BOM this way as it was in 2012.  But let us do it as a learning experience. If I click that “BOM version”, I end up staring at the following screen:

Just like in AX2012, I can’t do anything here, unless I right click /View detail on the BOM field. 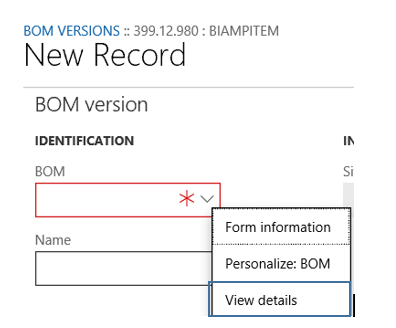 After clicking “View details”, we will end up in the screen below. And now we have reached a difficult moment. What is going on here?

Where am I? This is where many of us, maybe all of us, are thrown for a loop. But this is the 2012 two-pane screen where I have BOM-versions in the top half and the lines in the bottom half. The difference is that I don’t see the long list of all BOM versions in the database anymore. I only see what I have for this item. And if this is my first BOM, there is nothing to see.

This is where I create a new BOM-id by clicking new, and now I had better fill in an item group, the same one as on the item, or I will not be able to use this new BOM-version. If the Item Group does not correspond, this BOM-id will not show up in the picklist of BOM-versions to choose from. Leaving the Item Group blank is no option. You will also not find your newly created BOM-version in the list.

After creating my BOM version, in this case, number 133, I close this window and return to the previous screen. I could add the lines here or I could do that later. 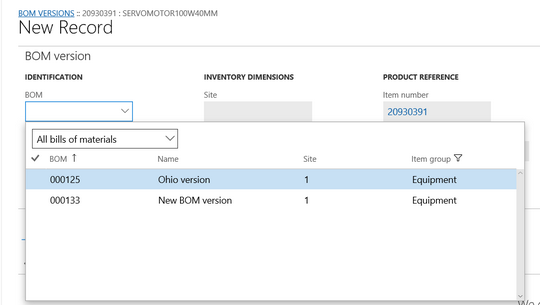 The screen above is my previous screen where I did my right-click/ View details. Now I can select my new BOM- version and the next step is adding the BOM lines.

Now let’s assume I have added my lines. It is time for the familiar “Approve” and “Activate” steps.

Now I click “Approve” and I get this screen. I am approving the version. 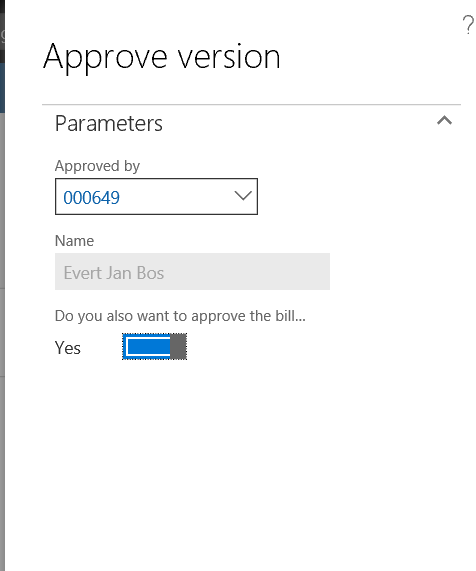 The slider allows me to ALSO approve the BOM. That is a new feature and an improvement.  Let us return to AX2012 for a minute. 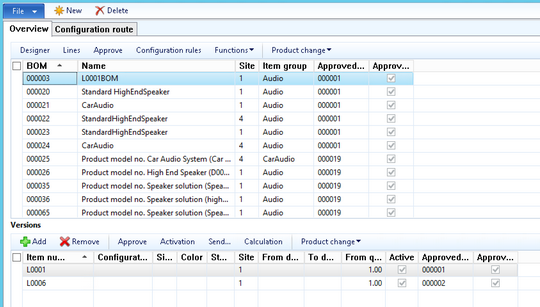 Now we are going to repeat the BOM creation process using the second option, “BOM and BOM version”. This is the AX2012 choice ‘Create BOM’.

We will encounter a small surprise here regarding the “Approval”. After clicking this choice, we get 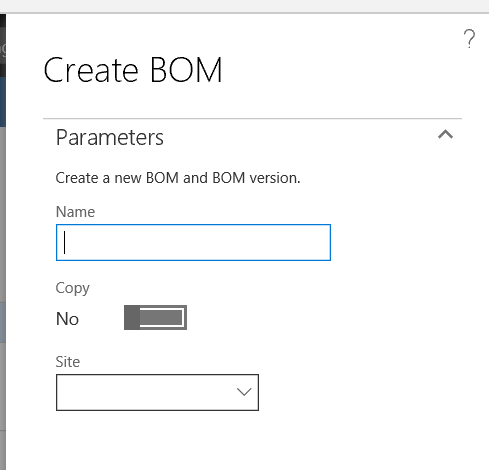 Our BOM version -id is created in the background (we have automatic numbering) and we just have to worry about giving the BOM a name and, optionally, a site. After OK we end up here:

Apparently, we created BOM version 137. The item group was chosen for us, of course, the same item group as our finished good. We can now create BOM lines. If we would do that now, there is an interesting surprise. Creating lines works differently here. If you click ‘New’ you can choose between “before” and “after” clearly a hint that you are updating an existing BOM, not creating a new one.

When there are no lines yet, the only choice is “After” and clicking it opens a new screen we did not have in AX2012:

When there are no lines yet, the only choice is “After” and clicking it opens a new screen we did not have in AX2012:

The interface above is an excellent way of finding BOM-components. The filter on the far left has the usual AX7 power where you can put in characters and choose from many different fields in the item. I can also filter by category. The best feature may be “Filter out stopped items” (in the red box), which addresses an old complaint of many manufacturing customers that the system did not stop you from adding stopped items to a BOM. It still does not stop you but you can at least filter them out.

But now a small disappointment. As opposed to AX2012, I do NOT see an “Activate” choice here. The “Approval” I see here is like the “top” approval we had in the AX 2012 screen where I see all BOM versions of the company.

When I am finished with my BOM lines, I click “Approval” and close this window.  Then I end up here:

To my surprise, I see that “Approved” = No. I was ready to Activate but that would generate an error. I have to approve again. This is the approval of the BOM version (bottom half of the AX2012 BOM version screen). Only then can I click “Activate” and I am done.