Home
Insights
Skype for Business Online transition to Teams – Do it before July 31, 2021

Skype for Business Online transition to Teams – Do it before July 31, 2021

Microsoft is no stranger to communication software (hello Exchange). However, back in the technology boom at the turn of the millennium, electronic mail communication didn’t fit all situations and instant messaging was finding its place in the world. Microsoft decided to enter the arena with Office Communicator 2007 back in 2007. In 2009, Microsoft released a follow up product as Office Communicator R2 and followed that product line with a rename of Lync 2010 in early 2011.

Around the same period of the release of Lync was Microsoft’s acquisition of a consumer instant messaging platform–Skype. Microsoft allowed communication between the two platforms a couple years later in 2013.

Some at Microsoft were interested in purchasing competitor Slack at this time, but Bill Gates wanted further development of the Skype for Business platform instead of bailing on it. Neither actually came to fruition as Teams was created during an internal hackathon and was released globally in early 2017. Now as Microsoft had two products with very similar feature sets, they made the choice in September 2017 to announce that further development of the Skype for Business product would not be focused on, and that Microsoft Teams would be its successor.

Towards the end of 2019, Microsoft began scheduling and implemented automated installs of Teams for users of Skype for Business. Even though users may have Teams installed, that doesn’t automatically mean that the tenant has fully transitioned to Teams.

To check, log into your Teams admin center. If you see a graphic like this in your dashboard, then you are not fully upgraded to Teams (away from Skype for Business Online).

Additionally, from the Teams admin center, if you (1) expand Org-wide settings, then (2) click Teams upgrade and see that (3) coexistence mode is anything other than Teams Only, then you have not fully made the transition to Teams away from Skype for Business Online. 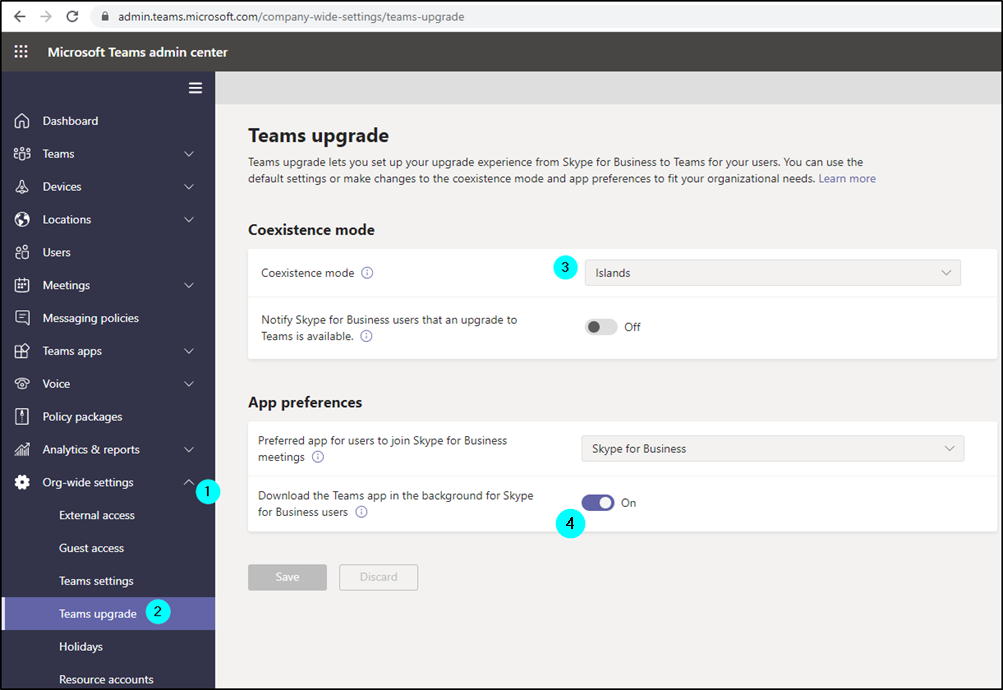 As previously stated, Microsoft selected a great many tenants already to turn on the Auto Update and installation of Teams for end users. To see if that was done in your tenant in the above screen capture, (4) refer to the section in App preferences to download the Teams app in the background for Skype for Business users. If you wondered how Teams was automatically installed on your system, this was why. Users having the correct software installed on their machine is one of the critical paths to moving away from Skype for Business Online.

With July 31 just a little way off, Microsoft is doing more for its customers who are still actively using Skype for Business Online to help prepare them to migrate to Teams. Starting in February 2021, Microsoft will increase the cadence of how often it reminds tenant admins that Skype for Business Online will be retiring. Tenant admins will see emails, alerts in the Microsoft 365 Message Center, and messaging in the Teams Admin Center.

Microsoft has provided documentation for upgrading to Teams to get you on your way. Microsoft continues to encourage customers who haven’t yet started their upgrade planning and implementation to do so now.

Have any questions regarding your transition to Teams away from Skype for Business Online? Sikich can help. Please contact us at any time.