Most Dynamics for Finance and Operations users (including AX 2012 R2 and R3 users!) will know that “directly derived” planned orders cannot be firmed. They are generated by MRP in these situations:

If MRP sees a phantom in a BOM, it only uses the quantity of the phantom to continue the explosion.

Below is the planned order that is directly derived. 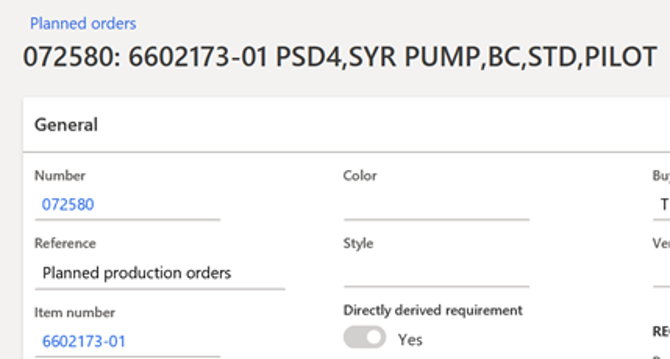 When trying to firm such a planned order, we get this: 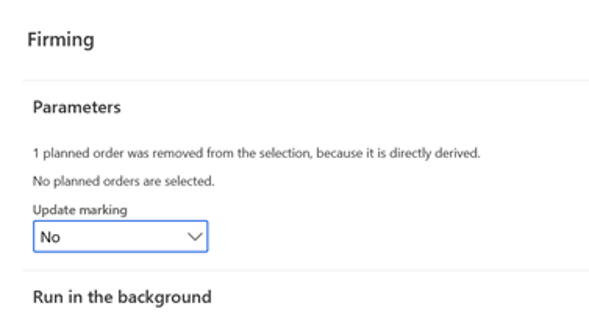 If you click “OK” in this window, it will be ignored. This planned order cannot be firmed.

This is not very common. We typically use service items with Line type – Vendor, because this is the standard scenario for subcontracting. In that case, there are no planned orders at all because service items are ignored by MRP (this is hardcoded behavior).

They cannot be firmed as this would disrupt the standard functionality.

They behave like “approved” planned orders. This means that their quantity never changes based on changed demand. The planned PO is a placeholder with the exact amount that is needed for the planned production order on the next higher level. It is created independent of any on-hand and it is not looking at any other demand even if you have period coverage. The pegging is strictly 1-1 to the BOM line demand. The bottom line is that the standard MRP calculation is not used for these “directly derived” planned orders. Not surprisingly then, they keep the same order number after MRP runs in regenerative mode.

Planner and buyers! You need a filter and a personalization.

For planners/buyers, the planned order list they work through should be filtering out the “directly derived” planned orders.

The Net Requirement screen should be personalized to show this “directly derived” value, so the user is not confused.

The “directly derived” field is called “Suborder” on that screen.

Hopefully, this blog has helped any planners and buyers take into account some measures, so “directly derived” planned orders do not get “in the way” of daily work.