Microsoft’s initial release of their Edge browser was built on their proprietary engine EdgeHTML, and didn’t quite keep up. In fact, support for that now labeled Microsoft Edge Legacy browser ended March 9, 2021. Microsoft got on the train at the beginning of last year by updating its version of its Edge browser to also use the Chromium engine, and now I dare say it is comparable to Chrome in using it. As such, instead of installing Chrome on Microsoft Windows server operating systems lately, I’ve been trying to use Edge, but Microsoft hasn’t made it easy.

From Windows Server 2012 R2, when I reach Microsoft Edge’s download page (https://www.microsoft.com/en-us/edge), I get prompted to download the version for Windows 8.1. 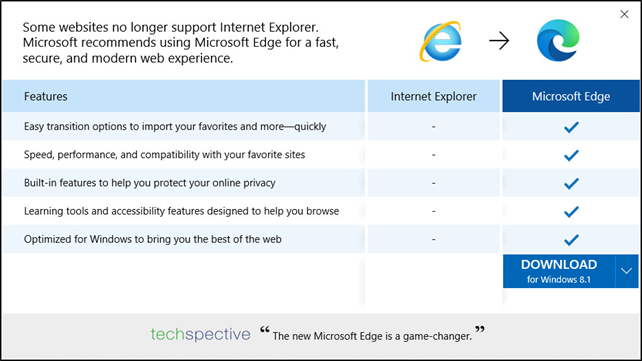 When looking at the dropdown arrow to see what other options there are, there is no option for any Windows Server operating system older than 2016.

Other than the Operating System not matching directly, the rest of the process of downloading and installing the Windows 8.1 version on Windows Server 2012 R2 works fine.

This would imply that it is already installed on the server through Windows Updates. When clicking the “Switch now” button a dialog box pops up asking for permission to start the app.

Everything looks promising so far, but once allow is clicked, that’s where the problem starts. Instead of the shiny new Edge browser, you are greeted with a very confusing message about needing a new app to open the new Edge app. To top it off, the OK button is grayed out and is unclickable.

This website seems to believe that Edge is already installed as well, and it doesn’t give the option to download Edge, but rather simply start the browser. 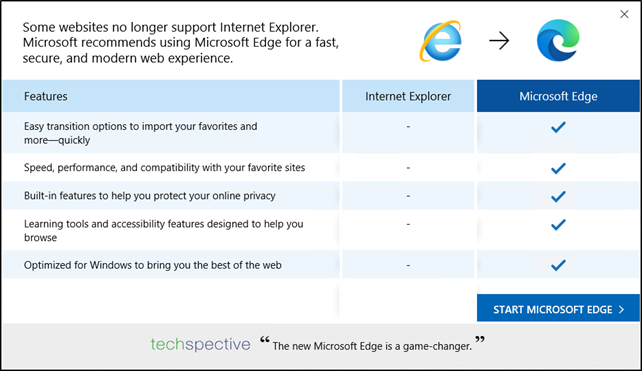 If the Start Microsoft Edge button is clicked, we again yield the same result of the dialog box asking to open an app and the “You’ll need a new app to open microsoft-edge” warning with a grayed out OK button.

At this point Microsoft has me thoroughly confused and frustrated and causing self-doubt. Maybe I do have Microsoft Edge installed somewhere and it just isn’t launching correctly. So I start scouring where it might be.

Back on the Windows Server 2012 R2 server, I can clearly see that Edge installed as a normal application, not as a feature.

However, Internet Explorer in Windows 10 could be turned off as a feature. 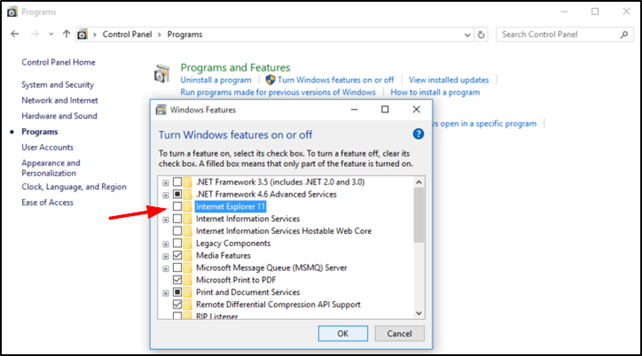 Perhaps I just need to find the executable and manually create a shortcut to it? Installed on Windows Server 2012 R2, the executable is located at C:\Program Files (x86)\Microsoft\Edge\Application. 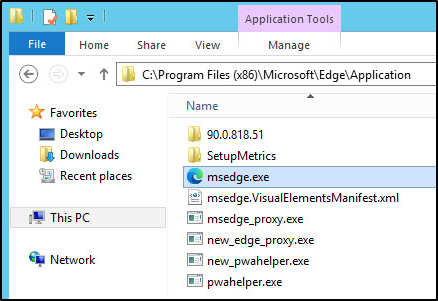 It is not there by default in Windows Server 2016 and 2019. So in a desperate hour, I just use Windows Search to try to find the executable in all of the OS disk. It wasn’t found.

Recall Microsoft’s download page for Edge? If we add a /business to the end we get a new page: https://www.microsoft.com/en-us/edge/business. Clicking the Download Edge Today we get a different result than previously.

We are awarded with the ability to choose the channel/version, build and platform for the installer of Microsoft Edge.

Selecting the latest available and choosing the 64-bit version is an option as well.

The install proceeds as it did on Windows Server 2012 R2.

Edge gets added to the installed programs.

When browsing https://www.microsoft.com/en-us/edge in Internet Explorer and clicking on the “Start Microsoft Edge” button, it launches a different dialog box. When clicking Allow, Edge actually runs this time. 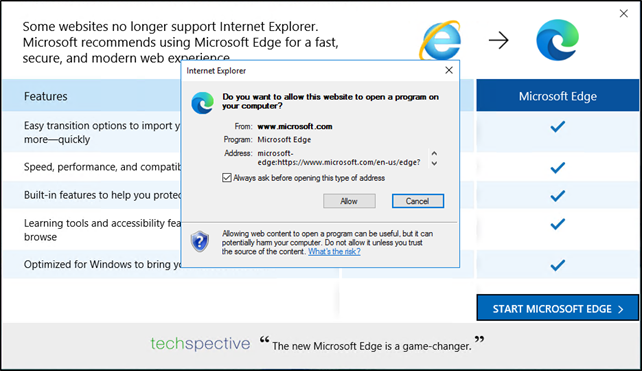 Have any questions about installing Microsoft Edge for business on Windows Server 2012 R2 (or even 2016 or 2019)? Please contact us at any time!