The coronavirus pandemic has nearly impacted every business in some way or another, and few industries understand this better than manufacturers. At our Manufacturing CFO Summit we held virtually last December, keynote speaker Dr. Chris Kuehl discussed what this new normal looks like for manufacturing, especially for 2021. For this first series entry, Dr. Kuehl examined the various challenges that manufacturing financial leaders must tackle to survive.

Dr. Kuehl started off by explaining that the phrase “new normal” assumes that there was an “old normal.” Manufacturers know getting to normal is a future goal that often doesn’t happen. With this “new normal,” some parts of the manufacturing sector have done quite well and others have done very poorly. He emphasized that how these parts performed depended upon the particular sector each manufacturing company serves.

What Manufacturers Can Expect in 2021

Most of the decision-making that affects business is going to be done at the state and local level. There will be 50 different approaches, depending on how each state and each community wants to handle this. Regardless, manufacturers will still get a certain amount of national recommendation as an attempt to get a national policy in place.

Dr. Kuehl pointed out that Biden’s recession response rests “very heavily on traditional recession reaction.” He explained that it will be focused on infrastructure with a bit more emphasis upon direct aid to individuals and small business. The infrastructure part, especially, could have significant implications for manufacturing as a whole.

In addition to roads and bridges, there’s an emphasis upon rural broadband as well, which is crucial with all of the shutdowns and remote-work requirements in place. Rural broadband matters greatly, because exports make up between 15 and 20% of the total US GDP. What makes up these exports? Agriculture and sophisticated manufacturing. Hence the need for a rural broadband focus.

Growth, however, does look good for 2021. Dr. Kuehl cautioned that it won’t be a complete recovery from 2020, but if manufacturers grow 4.7 to 5% in 2021, that’s still a significant offset to what was lost in 2020. Overall, Dr. Kuehl and other experts predict a good recovery all across the manufacturing board. 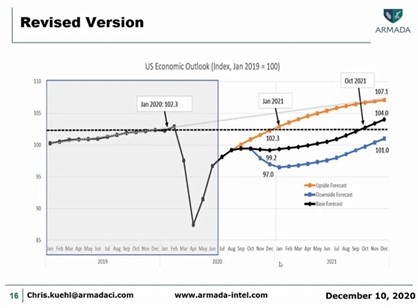 “So this is a fairly encouraging, upbeat forecast,” Dr. Kuehl said. “It’s V like. It’s not exactly a classic V. We’re not getting the extremely rapid recovery you sometimes get from a recession, but it’s a respectable recovery. It’s also important to note, and I think many of us saw this coming. This was supposed to be a fairly slow year anyway. We were expecting a recession in 2020, but it was going to be towards the end of the year. It was not going to be obviously this deep, but you began to see freight shipments fall off, even as early as 2019. It kind of peaked in early 2019 and had been declining since. So a lot of the downturn that we were seeing in the spring of 2021 was kind of setting up even before we had the COVID-19 crisis. This is a bit of an eye chart, and I apologize for that, but there’s something that we do as a company is the strategic intelligence system.”

The chart below is an attempt to summarize future predictions of the manufacturing sector. It’s predicted that things will “pop up a little bit” in the second quarter. In addition, sectors that were in trouble before the pandemic shutdown are rapidly recovering. However, they also predict that the recovery will stall out in Q4 2021. That said, overall, Dr. Kuehl and other experts predict a good recovery all across the manufacturing board. 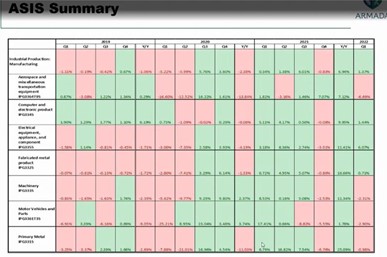 At the same time, he cautions that such rapid recovery will have some consequences. For example, banks are already anticipating that if manufacturers get a lot growth in quarters two and three, inflation will accompany it. With inflation, they could start raising their rates, which will, of course be a factor for the third and fourth quarters.

In addition, if you look at the amount of money that the corporate community holds, there is a merger and acquisition rush on its way. There is so much money on the sidelines right now, waiting for an opportunity and companies are going to take advantage of the opportunity to either buy into their competition, or buy upstream or downstream. There’s going to be a tremendous increase in merger and acquisition activity by mid-year, at the very latest.

Trends and Predictions From the Top Manufacturing Surveys

“The beauty of the Purchasing Managers Index is, as an economist, the biggest frustration is that most of the data we get is old by the time we get it,” Dr. Kuehl said. “The current data is generally from a survey. The trouble with surveys is that people frequently lie through their teeth, or they don’t know enough. Consumer confidence surveys drive me nuts because, consumers don’t know squat.”

The surveys then present a nice running total of what’s going on in the sector throughout the year. There are two different versions that are in wide circulation. The Institute for Supply Management has been doing it for decades in the US, and then Market, which is a British marketing firm, does it for the US and about 38 other countries. Each firm uses the same diffusion index where anything over 50 is expansion. Anything under 50 is contraction. These surveys showed a tremendous drop in early 2020 as expected, but it is coming back. The latest numbers from both Market and ISM have those numbers back into the 50s.

Another survey, the New Orders Index, which is a more future-oriented look for purchasing managers, has the numbers in the 60s. At the end of the year, it came down a little bit, but the number still sits in the 60s.

“The favorables are things like, dollar collections, accounts out or applications for credit,” he said. “You’ve got sales, you’ve got amount of credit extended, things that make credit managers happy. The unfavorables are things like, disputes, accounts out for collection, bankruptcies, slow pays, rejections of credit applications. All the damage in March and April was on the favorables. Those fell from the high 50s into the 30s and 20s.”

For now, the favorable numbers are good, hovering in between the 50s and 50s. The unfavorables have also evened out.

Robotics and technology are also playing a significant role. In Dr. Kuehl’s experience, the companies he works with are looking ahead to figure out how they’re going to spend their money, especially with their labor force. “They’re looking at their labor force, and they’re saying, look, going forward, if I’m going to match up with some of these protocols that are now in place because of the pandemic, it forces me to rearrange how people are working,” he explained. “It’s going to change the way I use space. It’s going to add additional expense in terms of keeping people distant and so on and so forth. Even with the vaccine coming, I know some of these protocols will stay in place and that’s money. So now I’m looking at, what am I going to have to invest in order to match what I’m required to do because of the pandemic, versus getting a robot machine technology into my shop?”

Robotics is going to accelerate the way it already has been for the last several years. Dr. Kuehl explained that American manufacturers cannot compete with China and India simply because America doesn’t have the “wage structure” to sustain a labor intensive business. With the pandemic, we now have a labor shortage simply because the jobs that are available in manufacturing now are at a lot higher level, a lot more sophisticated, and they require a lot more training, something that cannot be done virtually.

But even though the labor pipeline is not as robust as it has been in the past, it isn’t going to stop or even slow down technology. However, it will create challenges for the manufacturers to find the people to run the technology.

As for employment numbers, Dr. Kuehl cautions that those are going to be weird as well.

“The number that we normally see is U-3, which is easiest to the six cuts that come out of the Bureau of Labor Statistics,” he explained. “All it is are people who are formally on unemployment or formally in the system. That number is a little misleading, because right now it’s saying that the unemployment rate is 6.7%. There’s a U-6 version, says, unemployment is at 12% because U-6 picks up two categories of workers that are in major evidence right now. They’re the involuntary part-time people who could not find any other job, but part-time, or were made part-time by their employer. They’re partially unemployed. Then you have the discouraged worker, the person who is not formally in the system, still looking for work, but they’re not doing it formally because they’re not getting unemployment.”

When businesses are allowed to reopen, such as casinos and entertainment venues, many people will come back into the workforce. But for now, the U-6 number is nearly twice the U-3 number. Even though manufacturers are still doing business and they have this labor shortage, they can’t hire all of these people who have suddenly lost their jobs because they aren’t qualified to take these manufacturing jobs. As such the labor shortage issue continues to be one of the major drags on manufacturing.